Carolina Crown’s student members raised $35,287 in 31 days — online, via crowdfunding, during a pandemic.

The corps’ staff made the members’ participation into a game, and it drove massive success with very little effort.

What is crowdfunding? It’s the practice of “raising small amounts of money from a large number of people,” often via the internet. (Oxford Dictionary)

You’ve probably seen “campaigns” on social media from the likes of GoFundMe, Indiegogo, and others.

Those sites are examples of publish and pray, social media-driven efforts. Anyone can do it, and most go nowhere.

With “you’re on your own” sites like GoFundMe, the sky’s the limit. But the sky is also the safety net. There’s no guidance or direction to help your campaign succeed.

And how could there be? By some estimates, the GoFundMe platform gets 10,000 new campaigns added every day.

That method might work for viral (and deserving) causes like the $24 million for the TIME’S UP Legal Defense Fund and the $10 million Stoneman Douglas Victims’ Fund. But the vast majority of these campaigns don’t reach any such level of success or notoriety.

A “direct ask” with a digital twist

When you see a Change.org petition—something that costs nothing but a few seconds of your time—go by your Facebook feed, how often do you click and sign it?

And what about when it’s a GoFundMe page, asking you to open your wallet? How often do you donate to those causes?

What about when a friend asks you to write them a recommendation or help them move out of their apartment? How often do you say yes?

Nonprofit professional fundraisers have known this for decades: people hide in a crowd. And with very few exceptions, we ignore what doesn’t immediately impact our lives.

Facebook and all other social channels are full of noise. And simply yelling into that noise will rarely ever generate any attention or results.

Only the direct ask gets any real response.

The direct ask works because it’s real. But the same things that make it real also tend to make it slow and tedious.

Most of the time, people would consider that a good thing. That’s actually one of the ways we often judge a person’s sincerity… if you want my help, at least take the time to talk to me.

But authentic can still be automated.

Have you ever copied and pasted the same email, text or DM to 2 or more people? Of course you have.

We queue up a series of authentic email messages, written by professional copywriters and battle-tested on hundreds of prior campaigns. The message is sincere and the wording is unique.

On average, our campaigns collect about $60 per donor, and about 3 donors per member. That means that each member of our campaigns typically raise about $200 for their ensemble or organization.

It even works in a pandemic

Two recent surveys by Gallup and Durham & Company prove that now is the right time for fundraising.

Funds raised through crowdfunding grew 33.7% last year, and the number of crowdfunding campaigns is projected to double in the next 3 years.

Let’s look at how Crown’s campaign turned out. Their setup was larger than most, but it performed exactly as other campaigns have in the past.

That makes their model a great predictor of future campaigns’ success.

Crown’s admin team, led on this project by Ryan Brannan, Crown’s Director of Operations and Merchandising, understood that their members needed some incentive to max out their participation.

To improve participation rates, Ryan turned their fundraising campaign into a fitness challenge—and promised prizes for the winners.

Here’s how Crown designed their campaign—

First, Ryan combined fundraising and fitness training into one project. This had two positive outcomes:

This 2-fold approach adds complexity to your campaign, but it was key to Crown’s success.

Given the timing of Crown’s campaign—smack dab in the middle of a worldwide pandemic—participation had to be remote. That made tracking a challenge, but Crown is up to it.

They used a simple web form to track students’ “activity points” during their campaign. They assigned points based on rubric (expanded below).

This portion of the campaign was designed to be easy: be active, and use the platform to track your activity.

Ryan and his team awarded points as users reported their activities.

There are 5 different prizes available during the CrownFIT-A-Thon that anyone participating can qualify for.

One Grand prize was awarded to the whole drum corps if all minimum requirements are achieved.

Beyond the whole-corps grand prize, there were 2 team prizes, and 2 individual prizes.

In order to qualify for the member, team, and/or grand prizes, members had to satisfy all 3 of these criteria:

The Grand Prize required 100% participation and contribution from the entire drum corps to qualify.

Individuals of this team will be receiving gift cards. To qualify, every member of the team must satisfy the 3 criteria listed above.

This team will be awarded a pizza party, either during camp season or spring training.

To qualify, every member of the team must satisfy the 3 criteria listed above.

The individual who raises the most money will receive one very special piece of Crown history (but it’s for members only, so we can’t share it here!).

To qualify, a member must satisfy the 3 criteria listed above.

The individual who earns the most activity points will receive a valuable electronic device, useful in fitness training.

To qualify, a member must satisfy the 3 criteria listed above.

Crown’s admin staff divided the ~150 drum corps members into 10 teams of 15 members. Every team contained at least 1 member of every subsection.

This subdivision has LOTS of benefits.

And, because of those first two…

We recommend you assign at least one member of your student leadership team to every group (drum majors, section leaders, etc). These students can be responsible for leading communication, motivation, and overall success.

How you can repeat Crown’s formula

You NEED a champion!

It’s absolutely crucial that there is one person who champions this cause and directs this campaign from start to finish.

This person MUST have influence over members, or have strong involvement and support from someone who does.

The honest truth is this—

These campaigns run better when the band director is in charge. If not in charge, then at least a constant, enthusiastic source of motivation and support for the cause.

Band directors are overworked. But they are the single greatest force for achieving outcomes from their group.

Yes, you’ll stress yourself out obsessing over the numbers. But that’s good.

The more involved you are on a regular basis, the more energy you’ll put into ensuring success.

Check in on which members have provided enough contacts. Monitor whose contacts convert into the most donors.

The more detail you learn about your campaign, the more ways you can find to improve it.

Make it a friendly competition/game

Section vs. section is cool, but some bands don’t like that idea. Crown’s diverse team assignments are an excellent model here.

Small groups perform better. Bonus points if you can keep your teams under 10 kids per team. (Too big and the kids can start to hide in the crowd.)

Keep the competition positive. But make it earnest and competitive. Praise the top-performing groups, but slyly cheat a little to help the bottom few groups catch up. The closer the competition, the more excited the kids tend to get.

Give the kids a reason to buy in.

In the short term, the content prizes are usually a good motivator. But it’s important to give students a way to feel emotionally connected to the goal.

“We need new uniforms” is nice, but it doesn’t feel like a strong enough incentive for the kids. Instead, speak to them about something tangible that benefits them directly:

“Know how you hate the way you look in those dumpy old uniforms? Imagine if our band looked like THIS!”

Or, if you prefer the approach of Simon Sinek’s “Start with Why” philosophy, you could phrase it a little more meaningfully:

“I know you feel uncomfortable in the uniform. And when we don’t feel our best, we can’t perform our best.

And that means I am setting you up for failure. It’s my job as your educator to empower you with every tool at my disposal to ensure you maximize your potential.

And feeling empowered—feeling confident is a big part of that.

So that’s why we’re getting rid of the old uniforms and replacing them with something new, modern, stylish, and powerful… Imagine if we looked like THIS!”

Whatever reason or goal you come up with, we recommend you take the time to connect with your students about the WHY behind the WHAT.

Money is not the goal. Money is a means to an end. It’s the end that should mean something to your members and your organization.

Create alternatives in the game

Lastly, there’s the way out. Crown offered their students a few ways to earn points (though some were mandatory). It’s always a good idea to give kids an ‘out.’

“Don’t want to fundraise? Earn points by _____.” These alternatives (I like to call them “side quests”) add some freedom for the students.

It’s in your financial best interest to make fundraising MUCH more valuable in the point system than the side quests, of course. But they are a nice addition.

Take this with you

If you liked this piece, please consider sharing it with a colleague or friend.

The slides from Crown’s webinar are below.

Want to kickstart your crowdfunding campaign? Grab our FREE crowdfunding checklist below to get your campaign started on the right (or left!) foot— 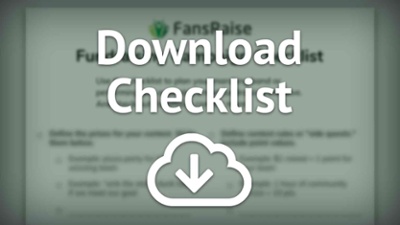